“Getting hacked” is the new way of saying “I really messed up.” At least when it involves the Twittersphere. Tyler Seguin used it as an excuse when a post appeared on his Twitter account Saturday night. 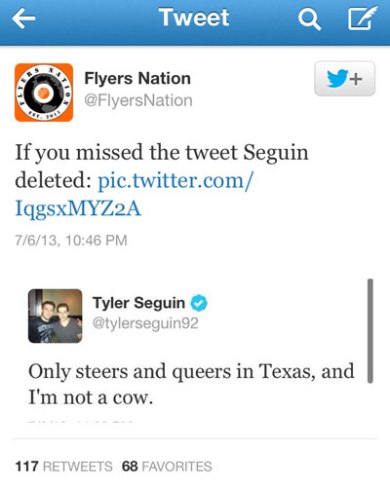 Now only Seguin knows whether or not he wrote what was posted on Twitter. But from this point on, “Seguin” could likely be linked to “homophobia” – this is the second tweet of his since April that’s included an anti-gay reference. Even though Patrick Burke of You Can Play basically gave Seguin a pass this time around, Seguin might as well be branded at this point – isn’t that a Texas tradition when it comes to steers?

Language? Please. The transgression prompted Seguin to censure himself – and suspend his account. And now, Jim Nill has questions about his latest acquisition.

“My problem with social media is you just don’t know how much of it is true,” the Stars general manager told the Dallas Morning News. “I think, as a society, we are trained to believe 100 percent of it is true, and that’s obviously not the case. It’s difficult to validate how things might happen, whether someone was truly hacked, or just what might have happened. I can’t go off hearsay, I need to ask questions.”

Still, it would behoove the organization to bring in the good folks from Burke’s You Can Play initiative, which aims to fight homophobia in hockey. One bad apple …

Tyler Seguin, I know you’re 21 years old. I know you run with other 21-year-olds. Maybe a few 19- and 20-year-olds, too. And I get that 21-year-olds make stupid decisions. Many of us were 21 once, too. Yet as a 21-year-old athlete who makes millions of dollars, you’re held to a different standard.

But even if you didn’t do it, don’t leave your phone sitting around. Or, if you’ve had one too many, don’t TWI – tweet while intoxicated. Things happen.

Haven’t you ever heard of screengrabs? And were you even born when the movie your Twitter account referenced was released?