rmlenzi in Uncategorized November 28, 2011November 28, 2011 607 Words
The Washington Capitals are a mess. There’s no other way to put it. And Bruce Boudreau lost control of this team. It was clear in his last few days as coach of the Capitals that he was on borrowed time. But, in that same vein, he should have been fired last spring, after the Capitals’ fourth premature playoff exit in as many years. 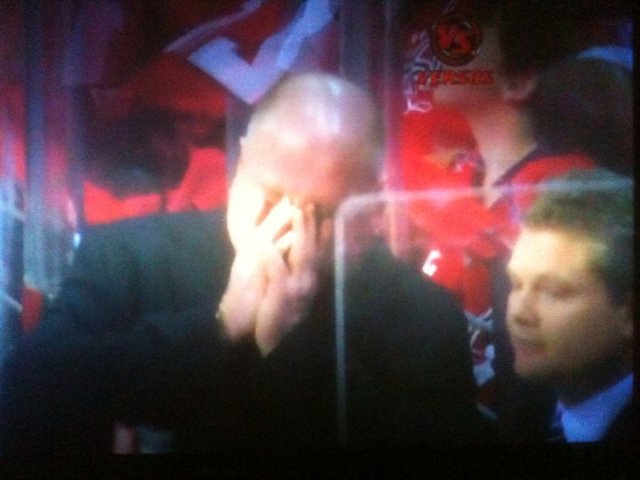 The fact that he decide to choose this season to make changes to the culture of the team – four years and six days into his tenure – is akin to grasping at straws.
His post-game quotes after Saturday’s 5-1 loss to Buffalo might have been the beginning of rock-bottom. Or further proof of it.
From Sunday’s Washington Post:
Boudreau, whose job security has been doubted with each stage of Washington’s struggles, was asked how a team finds its mettle.
“It’s got to come from within, I’ve got to believe,” the 56-year-old Boudreau said. “I’m hoping that’s got to come from within because if I’ve got to teach them how to be tough, then I don’t know quite how to do that.”
Because it was evident he had lost this team, and even more evident that he lost the man who is supposed to be his leader. Alex Ovechkin was minus-four Saturday night against Buffalo. He has scored one goal at the Verizon Center this season. He berated his coach with a few words and actions on national television.
There was clearly a discord between Ovechkin and Boudreau. If it wasn’t evident by now, then you’re just walking around wearing blinders.
That’s not to say the Washington Capitals aren’t culpable, either. The most glaring mistake the organization made in leading to this tailspin? Making Ovechkin the captain, when it clearly should have been either Brooks Laich or Mike Knuble – players known for their candor, for their roles both on the ice and in the locker room among their peers and, most importantly, for their heart. And if you hadn’t figured this out by now … Boudreau doesn’t get much respect from his peers – and I can tell you that’s a fact.
And, as evidenced by several things, he doesn’t get a lot of respect from his team. Note the players’ body language in this clip from HBO’s “24/7”:

With today’s hiring of Dale Hunter, expect that to change. Anticipate a chippier – maybe even a nastier – style of play, in which the players won’t cave and will play with a defined edge. Those were  hallmarks of Hunter’s playing career in Washington.
Which leads to my next point – the player-turned-coach is becoming en vogue, and Washington’s hiring of Dale Hunter is another benchmark of that trend. There’s a different psychology to NHL players nowadays as opposed to 15 or 20 years ago. There’s more of a need for sympathy and empathy, and I mean that in a totally non-flowers/lollipops/rainbows kind of way.
It serves Washington to pick up a younger, smarter, savvier coach, one who knows – to a certain degree – what his players are going through and how to connect with them, though while maintaining a certain amount of professional space.
Think along the lines of Kevin Dineen, Dan Bylsma, or Dave Tippett. And now that Dale Hunter has the chance to take over in D.C., he has the chance to take control – and the challenge of cleaning up that mess.

One thought on “A Mess with a Capital “M””