This is pretty much how I felt when I saw the Boston University hockey team was wearing a blue puzzle piece on their uniforms for autism awareness … as opposed to a white ribbon for a campaign against violence towards women, a campaign sponsored by the Massachusetts Coalition Against Sexual Assault and Domestic Violence.

Or would that be hypocritical? 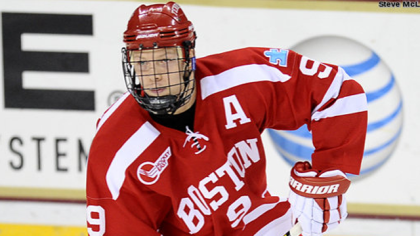 The Terriers wore white ribbon stickers on their helmet during the annual Beanpot tournament … days before Max Nicastro was arrested and pleaded not guilty to two counts of rape.

Come on, now,  BU. Consider one of the finite rules of public relations: Presentation is important.

Amd given the current state of affairs in the BU hockey program, it might behoove both the hockey team and possibly the athletic department to do a little more than just assemble a “task force” to examine the culture surrounding the hockey program.

2 thoughts on ““Are you going to wear the ribbon?””