Craig Adams retired from hockey earlier this week, and released a statement via the NHLPA announcing his departure.

You never saw his name in the box scores or in the headlines, but it’s etched twice on the Stanley Cup. Because Craig Adams was one of the grinders. And probably one of the more unique guys in hockey.

He was born in Brunei.

He was the last-ever draft pick for the Hartford Whalers before the team moved to North Carolina, a ninth-round pick. There aren’t even nine rounds in the NHL Entry Draft anymore.

He was a waiver pickup from the Chicago Blackhawks, three months before the Penguins won the 2009 Stanley Cup.

He was an NHLPA player rep – which, in my pro-union household, counts for something.

He is a smart guy. He went to Harvard. 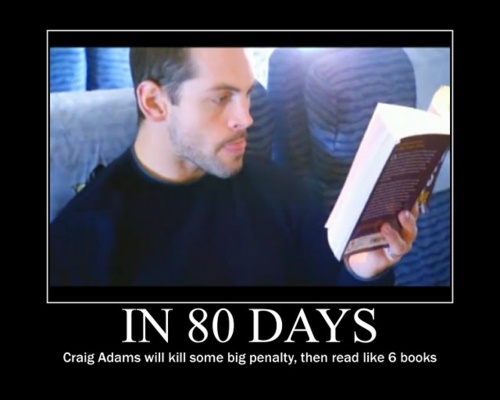 (I just thought that photo was funny.)

Craig Adams left hockey with some unspectacular numbers. But, as I sometimes said during Penguins games:

“Every time Craig Adams scores, an angel gets its wings.”

So, 62 angels got their wings in the course of Craig Adams’ 14 seasons in the NHL.