My name is Rachel, and I’m a Dale Hunter fan.

There. I admitted the problem. That’s the first step in the road to recovery, isn’t it?

Though I grew up in Maryland, I’m not a Washington Capitals fan. I like to joke that I was one of the thousand or so who knew the DC area had an NHL team before 2006. (And, yes, I own a Geoff Courtnall Capitals jersey, circa 1989.)

But Dale Hunter carved his place in Washington sports in the time he spent with the Capitals, playing in Landover and then in the District. Among his NHL stats? 1,020 points and 3,565 penalty minutes in 1,407 games with the Quebec Nordiques, the Capitals and the Colorado Avalanche.

And I knew that watching all those hockey games on Home Team Sports and SportsChannel America, in lieu of doing homework, would pay off somehow …

One of the more unique moments of my tenure at my former paper was when I got to interview Dale Hunter’s son, Dylan, who played for the AHL’s Portland Pirates during the 2008-2009 season, as I was working on a story on faceoff specialists in hockey.

A week earlier I’d met the son of Caps commentator Craig Laughlin, who assigned me a task. When I met Dylan Hunter it was less of an interview and more along the lines of this: “Dylan, I’m under strict orders from Kyle Laughlin to tell you he says hello. And I remember you running around Piney Orchard when you were about six years old.”

He was stunned that this random woman he’d just met would bring up pieces of his past. And we talked less about faceoffs and more about the time he spent living in Maryland, about six or seven miles from where I grew up, and the people we had in common. We talked about John Tavares, who was on his way to becoming the NHL’s No. 1 draft pick that year – a player whom Hunter regarded as one of the best faceoff specialists he’d seen to that point in the time he’d played hockey.

Then, Hunter told me what his father, Dale, told him when he was struggling to win faceoffs. And it gave a little insight into how Dale Hunter thought as a hockey player.

“Watch the official’s hand right before the draw,” Dylan Hunter recalled his father telling him. “Don’t watch the puck. Watch the hands.” 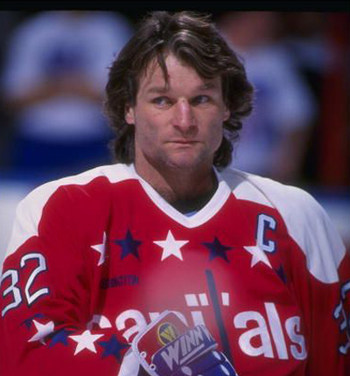 Dale Hunter was the face of all those Washington Capitals teams in the 1990s. If Rod Langway was the Secretary of Defense, the mainstay on the blueline, the Dale Hunter led the special ops. Hunter played with a hardened edge. He was a player who wasn’t afraid to mix things up, a renegade of sorts, both overt and covert. And he was an NHL pest before it being an NHL pest was in vogue.

TSN named Hunter one of the NHL’s 10 most hated players – No. 7, in fact. And he will probably never be absolved of one of the league’s more dubious moments in the 1990s – his hit on Pierre Turgeon during the 1993 playoffs. And from the outside, that may become part of the definition of his NHL legacy.

Yet, at the risk of sounding beyond creepy, if you looked into his eyes, an intense, almost scary competitive fire burned in them. Heck, after reading and watching all the coverage of his first few days on the job, that fire still burns in them.

But here’s the catch – and the basis of my admission. Not only am I a Dale Hunter fan … but I’m also a Pittsburgh Penguins fan. Something’s got to give, right?

One thought on “On Dale Hunter, or why you can’t have it both ways”