A handful of employees at the Colorado Springs Gazette won’t be going back to work on Monday. And this saddens me.

Will the online component carry the weight – and the clout – that print journalism is losing?

And, more importantly, how does the Colorado Springs Gazette – or any paper that’s making cuts to the newsroom – expect to “deeply connect with the readers,” let alone forge a connection with the readers … when you cut the people who go out and work with and among the readers? When there is no one left to engage with readers? How will electronic connections forge relationships in the community, in lieu of initial and continued face-to-face communication?

Newspapers are being cannibalized. Their employees are being eaten alive in an effort to keep others alive and in an attempt to reinvent the product.

Via a friend of mine, the American Journalism Review recently ran a story about newspaper downsizing and the lack of transparency that comes with it. But it also hit on a point. What is one of the effects of staff reductions? Ken Doctor, a news analyst who runs the website Newsonomics.com, asks this:

“How many [important] stories never see the light of day?” Doctor asked. “How many corruptions, large and small, are unfound? We don’t know; we don’t know what we don’t know.”

What is happening has forced me to ask some introspective questions about people like myself, who won’t be going back to work on Monday. Two instances brought these questions up: earlier this week I read about buyouts at the Denver Post, including theater critic John Moore, who wrote a poignant piece about his departure. Then, as I sat down Friday night to watch Denver-Colorado College hockey, a tweet came across my timeline – the aforementioned layoffs at the Colorado Springs Gazette. Layoffs that included the once-great paper’s college hockey writer. (Notice that the Gazette’s story didn’t include the mention or the number of people who lost their jobs – but the comments, some written by former Gazetteers, did.) 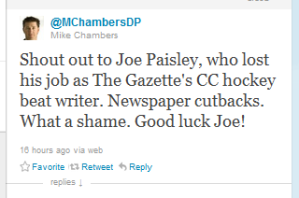 Are we casualties? Are we statistics? Are we martyrs? Or are we on the verge of something new, on the cusp of reinventing ourselves? Nothing seems to get better in the newspaper industry, and the number of supposed casualties continues to mount. Some of my peers believe they’re working on a sinking ship, some of my older counterparts are watching inept management run their papers into the ground. Others talk about how close their workplace was to bankruptcy – one newspaper couldn’t even order basic office supplies without approval of the CFO. (Journos, do you know who your outlet’s CFO is?)

In light of this, I think of Alfred, Lord Tennyson’s poem, “The Charge of The Light Brigade.”

In the movie “The Blind Side,” Michael Oher asked this as the poem was read to him:  “Someone made a mistake? … But why would they go ahead if they knew he messed up?”

So people are getting out. Some of us, not by choice. The stories continue. The questions continue to be asked. With each goodbye, I am saddened. Yet at the same time I am enlightened. I am buoyed by the strength and the spirit of each person who has gone through this. Each of you inspires me.

One thought on “The cannibalization continues”